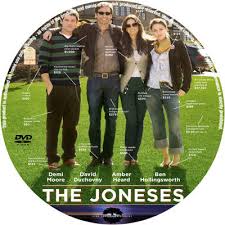 The film Keeping Up With the Joneses is about a family, The Joneses, – they are rich and seem to be the perfect family. There’s only one problem. They’re not a real family – they are employees of a stealth marketing organization and they know how to make everyone else want what they have.

The main idea of the film is the overconsumption, this is the state or an instance of consuming too much food, drink, fuel, etc. In case of The Joneses they want to transform people in shopaholics. In my opinion this is an easy job because nowadays our society is strongly influenced by consumerism and everyone is looking for the trendiest phone or the best car. This can cause depression or worse, people can commit suicide because they cannot pay for their bills. In the film, we saw a man who committed suicide and he is a perfect example of the ripple effect which means a situation that causes a series of other events to happen.

In spite of all, I think this is an excellent film which captures the attention of the viwer and transmits the idea that money and goods aren’t the most important in life. I would recommend this film to everyone, but especially to the teens who think that money can buy friendship and happiness!