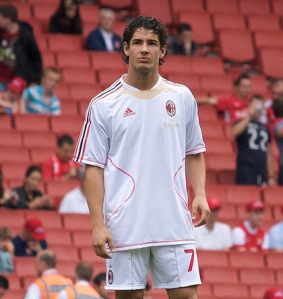 Alexandre Rodrigues da Silva, better known as Alexandre Pato, was born in Pato Branco, September 2, 1989. He is a Brazilian footballer who acts as a striker. He plays for AC Milan. He was born in the interior of Paraná, in the city that originated the nickname Duck.

In June 2006, with only sixteen years old, Pato competed in the International Championship sub-20. In 2007 Pato was transferred to AC Milan for € 22 million, and received his jersey number 7. His first game with AC Milan shirt was on September 6. In his first season he was considered a phenomenon.

Because of various injuries Pato could only make his debut for the Brazilian national team on March 26, 2008. He remains a great talent for the world of football.